I was listening to a few songs by They Might Be Giants about science, which are not bad.  We used to listen to They Might Be Giants while driving to math meets in high school, so it’s good to see that they joined the nerd club formally and are writing songs for the youth about science.  My favorite song that I’ve found is My Brother the Ape, which encourages us to think about all of life as a relation, which the data suggest is accurate.  (However, I’m not sure my actual brother with whom I share 50% of my genome would be thrilled to hear me singing this song, since he’s kind of hairy.) It’s a good song, but you know, not as detailed as you might hope for your introductory biology class.

I recently wrote some lyrics for my intro class when we discussed the Hardy-Weinberg Principle, one of the central ideas in population genetics that helps us understand if a population is experiencing microevolutionary processes.  It allows you to predict the frequency of alleles and genotypes in a population when it meets a set of assumption, assumptions that fit very nicely to music of Somewhere Over the Rainbow, a song that today’s students and their aged professors still seem to have in common.  (Through a series of trial and error, I have learned that they do not know This Land is Your Land or Blowin’ in the Wind, which you may also find shocking and horrifying.)  I have been singing Somewhere, Hardy-Weinberg, and maybe you should too.  (But don’t sing anything in parentheses below!)  It won’t offend your brother (the ape, or otherwise).

Somewhere Hardy-Weinberg
(Somewhere Over the Rainbow)
Somewhere there’s a population, of infinite size
(Somewhere over the rainbow, way up high)
With random maters and no mutation, selection, or migration.
(There’s a land that I heard of once in a lullaby.)
Somewhere the probability that two alleles will meet
(Somewhere over the rainbow, skies are blue.)
Will be a product of their free-ee-ee-quencies.
(And the dreams that you dare to dream really do come true.)
The likelihood of Big-A Big-A (AA) is going to be p times p,
(Someday I’ll wish upon a star and wake up where the clouds are far)
Or p-squared!
(behind me!)
And little-a with little-a (aa) will be the frequency of q times q
(Where troubles melt like lemon drops away above the chimney tops that’s where)
Or q-squared!
(you’ll find me.)
Somewhere there’s a population of infinite size.
(Somewhere over the rainbow bluebirds fly.)
Alleles meet in random order
(Birds fly over the rainbow)
In Hardy-Weinberg Equilibrium.
(Why then oh why can’t I?)
And don’t forget the heterozygotes (Aa), they’re out there too
(If happy little bluebirds fly beyond the rainbow)
it’s p times q times two!
(why then oh why can’t I?)
Posted by To Love What is Mortal at 2:03 PM No comments: 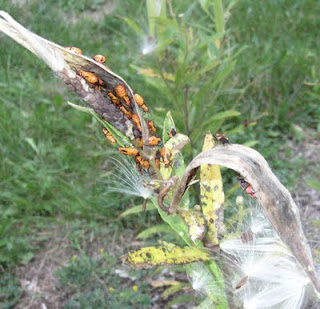 As much as we like to control nature with our planning and our plows, we still seem to recreate it in our own backyards.  And I am no different, as I have been turning my yard back to a bit of weeds.  I have let an area of Queen Anne’s Lace go to it, which I may regret next year since one spontaneous plant in 2010 seemed to seed an area with a diameter of ten feet or so for 2011; I have a weakness for that plant, so soon it may fill the yard.  I have also planted some sensible natives, like butterfly weed, which is a member of the milkweed family with a shocking orange flower that would inspire a grandmother’s bonnet.  Robert Frost has a poem, “The Tuft of Flowers,” about finding one of these plants after a field had been mowed down by following the flight of a butterfly— Frost imagines the mower leaving this “leaping tongue of bloom the scythe had spared” from “sheer morning gladness at the brim.” Sounds like the stuff of poetry, doesn’t it?   I was expecting the plant to attract butterflies (since the scythe is seldom wielded at my house), which it did.  But tonight I found the plant has also attracted bugs an orange as vibrant as the flower once was.  Imagine Frosts gladness had he found the butterfly weed covered in cool bugs!
After a little googling, it looks like these orange busybodies are large milkweed bugs that breed and feed on the plant and tufted seeds.  Many milkweeds have chemicals that protect them from herbivory, but this bug like the catepillars of queen and monarch butterflies that also feed upon it, can utilize the chemicals for their own protection.  Their bright coloration is like wearing a bright orange vest to advertise your presence—predators see them and leave them alone because they are toxic.  Such a nice surprise to find when I thought the flowering was complete.  My little girl agreed.  It’s a new adventure every day, even if you don’t wander out of the yard. 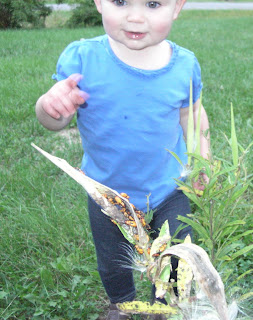 Posted by To Love What is Mortal at 6:47 PM No comments: